Welcome to our guide about the Canary Islands. We also touch on the smaller islands and islets at the end of this article. The Canaries lie off the western Africa mainland in the Atlantic Ocean. These popular Spanish islands are among the top tourist destinations in the world. This has been the case for the past several decades.

Those familiar with this island grouping will probably know the Balearic Islands also. This is the other archipelago of Spain which consists of 4 major islands and many islets.

Please use the orange links to quickly move around the page to your island of interest.

The Canary Islands, The 7 Main Islands

The Canaries or Las Islas Canarias in Spanish are largely volcanic in composition, as a result, many of the beaches have black sand. There are plenty of magnificent beaches here which are one of the biggest attractions for tourists. Tenerife is the largest and most popular for tourism. Fuerteventura, Gran Canaria and Lanzarote also attract millions of visitors each year.

So Where Did The Name Of These Islands Come From?

The Canaries name does not come from the pretty birds but from Latin. Insula Canaria or “Gran Canaria” is actually a reference to Dogs. The Island Of Dogs to be precise may be a result of the huge seals in Roman times. While nobody is sure, this theory seems to be the most credible.

Another of the many names of the Canaries is the “Fortunate Isles”. This is certainly the case in Greek mythology. The ancient Greeks would often say the Fortunate Isles are a paradise with no winter. This is a reference to the superb weather and endless summer here.

The Canary Islands enjoy a subtropical climate where the winters are mild and the summers are hot. The Canaries are known as an “Archipelago”, this name refers to a group or cluster of islands. According to a recent study, the population of the Canary Islands is around 2.2 million.

Which Is The Largest Of The Canary Islands?

The largest Canary Island according to size is Tenerife which covers an area of 785 square miles. You can check all the maps here to get an idea of the layout of the island. Tenerife also has the largest population of 900,000 inhabitants. Next we have Fuerteventura, Gran Canaria, Lanzarote, La Palma, La Gomera and El Hierro.

The super island of Tenerife has the largest population of the Canary Islands with close to 950,000 inhabitants. This is more than any other Spanish island. Tenerife is also the most popular of this Archipelago with over 5 million visitors each year. Tourism is big business here, this island is home to some of the best resorts in the Canaries. This destination gets really busy over Christmas and peaks in March when the temperatures are much warmer.

The popular resorts of Los Cristianos and Playa de las Américas lie in the southwest of the island. This is also where you will find much of the nightlife. To the north is the more sophisticated Costa Adeje which is popular with the wealthy.

The map below once clicked becomes a larger image that displays the main islands. This image also shows the islets, top tourist locations, towns and cities. If you want to see the mainland you can check the map of Spain here which also touches on both archipelagos.

The Canaries have a population of 2.2 million permanent inhabitants and cover an area of 7,500 km². This area accounts for around 1.5% of the countries landmass. In total there are 17 autonomous regions of Spain with these islands ranking as the 13th biggest.

The 7 main islands all enjoy a sub-tropical climate throughout the year. As a result, this makes them one of the top holiday locations as it gets colder further north. The temperatures can vary depending on the time of year you choose to visit. We have a useful guide about which islands have the warmest weather during winter, spring and autumn as these are the busiest times for tourism. This also provides links to individual pages for monthly weather and climate highlights.

Below is list of the 7 main Canary Islands beginning with the largest. 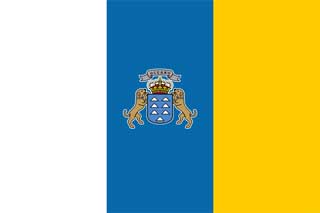 Like all the autonomous regions of Spain, the Canary Islands have their own flag. The white, yellow and blue flag with crest is very distinctive and quite different from the yellow and red national flag.

The island of Gran Canaria lies in the centre of the Canary Islands. Tenerife lies to the west and Fuerteventura to the east. The population of this island is not quite as big as Tenerife with some 865,000 inhabitants. Around 400,000 are currently living in the Capital City of Las Palmas de Gran Canaria in the north.

The climate here is pretty good with normal temperatures of between 20 – 26 Celsius. This is one of the warmer islands during the winter and spring, especially April which is near perfect conditions. Tourism to Gran Canaria accounts for over 3.5 million visitors each year.

Canary Islands Off The Western Coast Of Africa

Lanzarote and Fuerteventura are the most eastern of the Canaries which lie off the western coast of Africa. Fuerteventura is a short distance south of Lanzarote. The short ferry trip between these islands is a popular day trip.

The beautiful island of Lanzarote is the most northern of all the Canary Islands. Lanzarote has the third largest population behind Tenerife and Gran Canaria. There are some 150,000 permanent inhabitants here. For land mass, Lanzarote is smaller than Tenerife, Gran Canaria and Fuerteventura.

This island still attracts millions of visitors to it´s wonderful resorts each year. For example, in 2008, Lanzarote recorded over 5 million visitors. Lanzarote continues to generate high levels of tourism each year to it’s unique attractions and super resorts. The tourist resort of Puerto del Carmen attracts over 1 million visitors each year.

The windy island of Fuerteventura lies east of Gran Canaria and to the south of Lanzarote. This island is second only to Tenerife for landmass but has a small population. Currently, there are 122,600 people living here. Fuerteventura boasts many fantastic resorts such as Corralejo and Costa Calma. Jandia and Caleta de Fuste are others worth checking out.

Most western of the Canaries is the pretty island of La Palma. This island has a population of 85,000 inhabitants which makes it the fifth largest of the seven. 17,000 of the total population live in the Capital Santa Cruz de La Palma. The beautiful area of Los Llanos de Aridane lies on the west coast of the island. Here there are another 20,000 people living.

El Hierro is the smallest of the Canary Islands which covers an area of 104 square miles. The population is also the fewest with some 8300 inhabitants. El Hierro is also the only Spanish Island which is 100% green renewable energy.

La Gomera is the second smallest of the Canary Islands with a population of 23,000 inhabitants. Circular in shape, this island is one of the more mountainous of the 7 islands. Although volcanic in origin, here you will find lush valleys and unspoiled rain-forests. There is also a large variety of plant-life. Many that come here are looking to take advantage of the super hiking and walking trails.

There are no direct flights from Europe apart from Tenerife. Most tend to take the hour long ferry journey from Tenerife to San Sebastian de la Gomera. You can also arrive to Playa Santiago or Valle Gran Rey. Most of the beaches here have black sand and crystal clear Atlantic Ocean waters.

Finally we come to El Hierro, the smallest of the Canary Islands and furthest south and west. The population is also the smallest with around 8300 permanent inhabitants. Some refer to El Hierro as “The Meridian Isle”. This is the only isle in the Canaries which is 100% sustainable using only renewable energy. Diving is particularly popular here with around 45 different dive sites to enjoy.

More Sites In Our Network